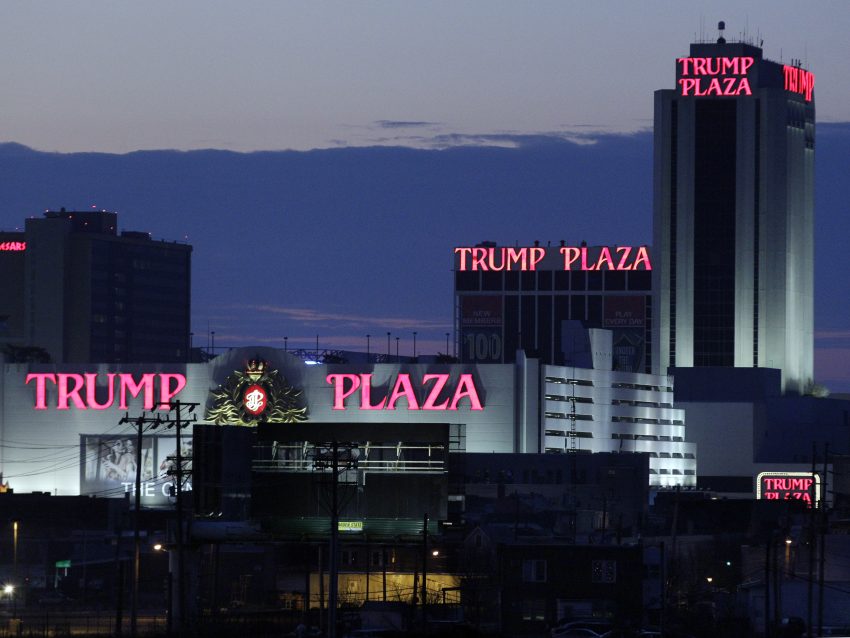 Donald Trump’s Trump Organization began construction of this casino is 1982. The gaming section of the Holiday Inns, Harrah’s joined the enterprise as a partner a few months later. The agreement was that the Trump organization would oversee the construction, while Harrah’s would actually operate the casino.

The property was opened in 1984, under the name Harrah’s at Trump Plaza, and the complex contained over six hundred rooms, a health club, a huge showroom and a large casino. This was on a plot of land next to Caesars, Atlantic City. Five months after opening the name became shortened to the Trump Plaza Hotel and casino. Trump had built several high roller suites which were rarely used, and the casino did not perform well. The poor results led to disagreements between Trump and Harrah’s, and Donald Trump bought out Harrah’s interest in the property in 1986.

In 1989 Trump purchased the unfinished Penthouse Boardwalk Hotel and Casino, including a hotel tower that was originally a Holiday Inn. He also bought a nearby parking lot, and he planned to expand the Trump Plaza Hotel and Casino on to the Penthouse site. Later, Donald Trump bought the bankrupt Atlantis Casino Hotel, separated from the Trump Plaza by the Atlantic City Convention Centre, and renamed it as the Trump Regency. This he wanted to become a hotel annex to Trump’s Plaza Hotel and casino.

In 1988 and 1989 the World Wrestling Federation billed the Wrestlemania 1V and Wrestlemania V events as being hosted by the Trump Plaza Hotel and casino, but in reality Trump was only the sponsor of the events, which were both held at the Atlantic City Convention Hall.

Trump Plaza casino was the scene of a notorious baccarat session in 1990, in which the Japanese high roller Kashiwagi lost ten million dollars. A fictionalised version of this scene was later incorporated in Martin Scorsese’s film Casino.

The revenue of the Trump Plaza hotel and casino took a big dip in 1990, due to competition from the newly opened Trump Taj Mahal. Trump averted default on a mortgage payment in 1991 by taking out a loan on the Plaza parking garage. Trump then negotiated a deal with the Plaza’s creditors in which the debt would be exchanged for a bond with a lower interest rate, plus a certain amount of preferred stock. This plan was submitted as a pre-packaged bankruptcy deal in 1992.

In 1995 Donald Trump granted ownership of Trump Plaza to his new company, Trump Hotels & Casino Resorts, later to become Trump Entertainment Resorts. The company also acquired the Trump Regency hotel. The East Tower, formerly the Holiday Inn, was opened, and Trump World’s Fair followed. This was connected to Trump Plaza by a loggia across the Atlantic Convention Hall. In 2013 Trump Entertainment Resorts announced a decision to sell the property, but the sale fell through. And in 2014 it was announced that the Trump Plaza Hotel and casino would close that year is a buyer was not found.  In that same year Donald Trump filed a lawsuit requesting that his name be removed from the whole business as he was no longer involved with, or controlled Trump Entertainment Resorts.

Trump Plaza Hotel and casino closed for good at the end of 2014. This left over a thousand employees out of work.