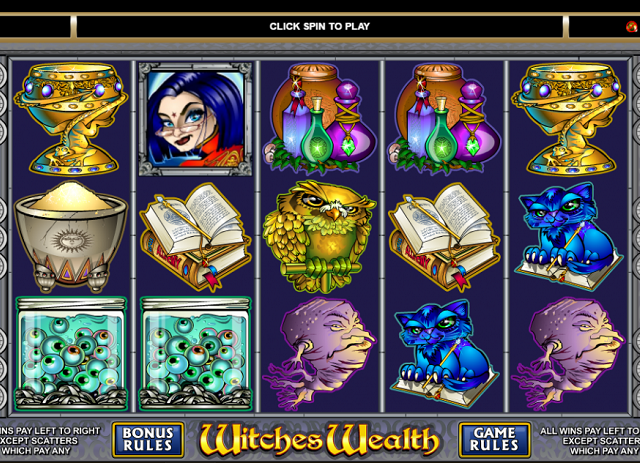 Witches Wealth is an online slot game from Microgaming that follows the escapades of Serena the modern blue-haired witch and her feline companion Mr Twinkles. This slot game incorporates 5 reels and 9 paylines in a fun magical-themed game that offers 2 unique bonus features.

The Mr Twinkles Double Bonus feature is the game’s main feature, and consists of a Spinning Wand Bonus game and a Flying Rescue Bonus game, each of which offer a selection of bonus prizes.

Witches Wealth at online casino is set against a simple blue background, upon which are transparent reels framed by an ornate stone border. The reel symbols themselves are bright, colourful, and highly detailed, and feature a number of magical objects that one might expect a witch to use when brewing magic potions, and also a number of animals that are usually considered to be a witch’s companions, including owls, bats and, of course, Mr Twinkles the cat. Each potion ingredient glows ominously, and the game’s graphics deliver a fun, fantastical atmosphere which is reinforced by its creative bonus games.

On the reels of Witches Wealth are theme-related symbols of purple mandrake roots, jars of toads’ eyes, pots of gold dust, a cluster of glowing potions, spell books, a diamond-studded gold chalice and owls, bats and cats.

Serena the bespectacled witch serves as the game’s wild symbol. This wild symbol can substitute for all other game symbols, including the bat scatter symbol, to create winning combinations.

The bat icon is the Witches Wealth scatter symbol, which awards scatter pays when 3 or more of these symbols appear on the reels.

If casino players land 3 or 4 Mr Twinkles scatter symbols on an active payline, the Spinning Wand Bonus feature will be activated. Players will be redirected to a separate screen, and must press the ‘Start’ button to spin a magic wand. The wand will spin to land on 1 space of a selection of prize spaces, and players will either claim their respective prizes and return to the base game or land on a ‘Bonus’ space and advance to the next bonus feature.

The Flying Rescue Bonus can be triggered by landing 5 Mr Twinkles bonus symbols on an active payline, or by landing the magic wand on a ‘Bonus’ space during the Spinning Wand Bonus feature. Players will be redirected to a screen that depicts a balcony, with Serena on the left hand side and her companion Mr Twinkles on the right. The objective of this game is to help Serena fly across the balcony to rescue Mr Twinkles while simultaneously dodging a number of falling objects.