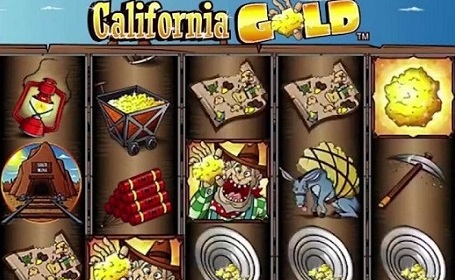 There are a number of digital slot titles dedicated to the California gold rush of 1849, but few do it with the comic-book flair of NextGen’s California Gold. Set against a cartoonish backdrop of the arid American west, the game features archetypal characters and artefacts from the world of frontier gold mining in its icons, arranged on a weathered wooden frame.

California Gold features 20 paylines on five reels displaying three windows each, and players can play any number of paylines from 1 to 20. Bets per line can also be set at between 0.01 and 2.00 per spin in the relevant currency, so those on a low budget seeking to strike it rich and the high rollers looking to get even richer are both catered for, just as they were in the real gold rush.

All Symbols are Theme-Related

California Gold avoids the familiar Poker symbols and instead uses symbols associated with old-fashioned gold mining. The lower-value icons come in pairs of equal value; three pickaxes win the same amount as three barrels, for example: 5 coins. Next up in value are a lantern and a map, then a stack of dynamite and a gold pan. A coco-pan of ore and an overloaded donkey complete the lower-value symbols; each is worth 15, 25 or 200 coins for three, four or five of a kind.

The two high-value symbols pay prizes for two of a kind or better. The mine icon is worth 2, 15, 100 or 500 coins for two, three, four or five of a kind, and the bandit icon, an evil-looking guy hiding behind a rock, wins 5, 20, 200 or 5,000 coins for the same matches. The slot can be experienced on internet in the same way keno is tried out online here.

A delirious miner clutching a monster nugget is the California Gold Wild, and it only appears on Reels 2, 3 or 4, although it substitutes for any symbol except the Scatter in the usual way.

If the Wild appears on all three of the centre reels at once, it triggers the Mad Miner Bonus. The player is shown a new screen, with a number of mines to choose from. Once they select a mine, they then journey through it collecting nuggets, which add up to the total won on the bonus. Usefully, this bonus can also be triggered during free spins.

The free spins bonus round, consisting of 10 free spins, is activated by three or more Scatter symbols appearing anywhere on the reels. The Scatter is a huge gold nugget, and during free spins, all prizes are tripled. So in this phase, extra prizes like the Mad Miner Bonus can be very lucrative.

Two or more Scatters also trigger a multiplier of the total bet for the spin; from X2 for two Scatters, up to X100 for five. Players can check the rules and payouts at any time by clicking the Info button at the base of the screen. California Gold also features the standard NextGen Gamble and Auto Play features.