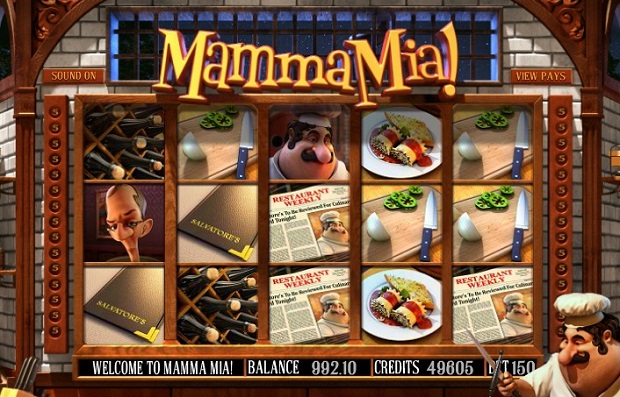 Mamma Mia slot is not as you would initially think, about the movie of the same name. This slot instead revolves around a very stereotypical Italian chef and his quest to impress a snooty looking food critic. Offering the player thirty optional paylines set out over five reels, Mamma Mia slot caters for all budgets and players of all experience levels.

Each line can be played for one to five coins with each coin being worth between 0.02 and 0.50. Mamma Mia slot is a medium variance game, which means that the small wins happen relatively often, and the big ones aren’t too hugely difficult to trigger either.

Mamma Mia slot is a very busy, graphically heavy slot opposite to the light graphically. It takes a while to figure out where everything is in the game. Everything fits into the background, from the buttons which have been done to look like copper pots and pans, to the reels themselves which sit on a wall of the restaurant kitchen. The chef is in the foreground, cutting up a green pepper. He is actively involved in the game and gets excited, shouting rather stereotypical Italian phrases at you when you get a win. The sound track is unique, with music playing all the time and ambient kitchen noises behind the music.

Mamma Mia slot is set in an Italian Restaurant kitchen. All of the symbols are to do with the theme and all of them animate. At the bottom of the paytable we have sliced green peppers, a rack of wine and a pot of soup. A newspaper, a bill folder and a dish of pasta are the mid paying symbols, awarding up to 625 coins for five pastas in a row. The waiter, the snooty critic and the portly chef are the top paying symbols in the game, paying out 2500 credits for five chefs in a row on an active payline.

The wild icon is a symbol with bars and the word Wild on it. These occur naturally during the game, but can be locked in place for extra spins. This costs extra credits and you can choose how many of them you would like to lock.

At any point during the game if you get three cloches, or food covers, you get to choose one of them in a little click me feature. This happens on the regular reels. Each food cover hides a cash prize which will be added to your total. 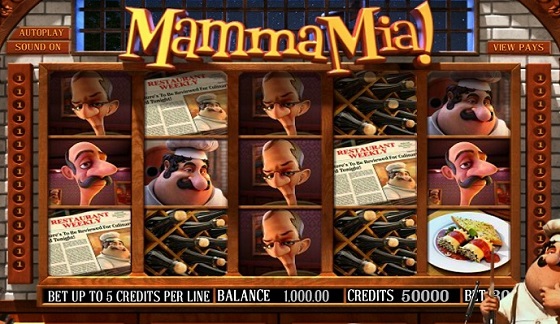 What would an Italian restaurant be without pizza? Three pizza symbols anywhere on the reels will trigger a second screen game where you get to create a pizza with the chef. This is a free spins round which happens on a separate set of reels.  On these reels all of the symbols relate to pizza toppings, such as olives and anchovies.  Each time you spin the reels and create a winning combination, the chef will add an ingredient to his pizza. When the round is over your total win will be added to your balance.

The snooty critic in Mamma Mia slot of course has to have his own little bonus game. Three or more menu symbols launch this game where you have to help the chef to decide which dish to serve the critic. The critic will judge your meal using four criteria. The higher the score, the higher the cash bonus for you.